After years of struggling with a web-site that I never seemed to be able to keep current, I've decided to try routing our domain to a blog that will be easier to keep up. My hope is that anything we lose in flexibility, we'll more than make up in ease of use.

Comments, greetings, and suggestions for additional features are more than welcome. Right now, comments are set at the lowest security level that avoids spam, meaning you don't need an account or to log on, but you will need to enter a word-verification test to prove you're not a robot. So long as there are no problems, it will remain that way.

We'll be adding content as we go along, and if you check the sidebar, you'll also find links to our other blogs (Chris's, mine, and my blogged weekly web-comic, "Minions at Work."), so check back often, subscribe to our feed, or if you have a Google account, become a follower.

Thanks for coming, and enjoy your visit.

- Steve
Posted by J. Steven York at 5:05 PM No comments: Links to this post 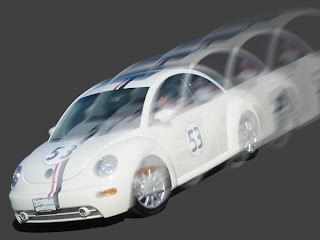 Everywhere we go, people ask us about our rather conspicuous car. Just today, for instance, I had a person ask to take a picture of it when we stopped for fuel, and had someone lean out their window and yell "nice car" as we parked next to a shop. Literally hundreds of people have photographed it, and thousands have talked to us about it. It gets attention, smiles, and waves everywhere it goes.

Here are a few common questions and the answers to go with them.

Did you paint it yourself?
No, we actually bought it off a lot this way.

Was this car used in a movie?
No, it was a promotional car made for the movie "Herbie Fully Loaded," and used to promote the film. All the Herbie cars used in making the films, from the original "The Love Bug" to "Herbie Fully Loaded" were classic air-cooled VW Beetles. Our Herbie is a water-cooled New Beetle model.

The markings used on the car, however, were created by a collector who owns one of the original Herbie cars used in "The Love Bug" and are modeled after that car in every detail. They're as authentic as they can be under the circumstances.

So it's just an accident that you ended up with a Herbie car?
Yes and no. I've wanted a Herbie since my dad took me to see "The Love Bug" at the drive-in theater in his 1959 1/2 Beetle when I was a kid, but much as I begged, he wouldn't repaint his car for me.

It's one of those things that sticks in the back of your mind, but I'd all but forgotten about it. When our 2001 New Beetle was totaled in an accident (they're also very safe cars, I escaped with nothing more than a small bruise where the side airbag hit my shoulder) we looked for a replacement, and diesels were hard to find. There were only a few on lots in the state of Oregon. One of them was our Herbie.

When I called, the salesman was actually reluctant to tell me about the Herbie conversion, afraid it would turn me off. Instead, I was grinning from ear to ear. It was destiny. I was thrilled.

What kind of car is it exactly?
It's a 2005 Volkswagen TDI New Beetle.

What kind of engine does it have?
A four cylinder turbo-charged diesel. Yes, our Herbie burns diesel. He has a five speed manual transmission.


How fast does it go?
You're not a traffic cop, are you? Actually, we're too chicken to find out. Let's put it this way. Herbie will hit 100mph without breaking a sweat or getting anywhere near his redline RPM in 5th gear. He REALLY likes to go 80, and would cruise that way all day if we'd let him.

What kind of mileage does he get?
40 MPH on a good day, maybe a little less on a bad one. It doesn't vary hugely at different speeds or with or without the air conditioning. It's a very forgiving car in all respects.

(Usually to Steve, who is 6 feet, 6 inches tall) How do you fit in there?
It's actually an amazingly roomy vehicle in there. Those commercials they used to run about the advantages of "the arch" were quite accurate. There's tons of head room and shoulder room. Leg room is a little more limited, but still fine, even for me. Of course, I don't ride in the back seat much. (I can, but it's pretty uncomfortable.

Herbie's other comforts include heated leather seats, a sun-roof, and a CD changer.

Does Herbie Drive Himself?
Not our Herbie. But we have equipped him with a GPS system, so he can at least navigate.
Posted by J. Steven York at 3:05 AM 1 comment: Links to this post

This is a test post, just to see how the new stuff works.
Posted by J. Steven York at 11:15 PM No comments: Links to this post