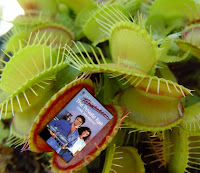 Since Chris and I write in a lot of different genres, we've become rather sensitive to the way people -- and the media -- often thoughtlessly disrespect fiction genres they know nothing about. It isn't just that they disrespect the genres, they disrespect the millions of people who read and enjoy them.

Science Fiction, media tie-in works, and Romance seem especially attractive targets for this kind of behavior, but it can happen to most any genre, or even individual authors (If they're big enough to approach being a genre-unto-themselves.)

Here's a prime example for you in the form of a Superbowl ad for Teleflora. Actually, it's hard to count the number of slams in this mean-spirited misfire at humor. It certainly isn't aimed at the people who get flowers. Apparently it's going for an untapped binge-drinking frat-boy market ("Dear Jean. Enjoy the flowers. Had a great time last night. Sorry you passed out before the fun started. -Knob" Shudder.)

It pretty much insults women, overweight women (twice), unattractive women, cat lovers, cats, and overweight cats, but it does manage to work romance novels in there too.

Or better yet, help the economy by sending some flowers -- through anyone but Teleflora.

Look, I do this myself sometimes, and I've been called on it. But my philosophy is, even if a genre or author isn't to my taste, if it's found a popular audience, it clearly has virtues I simply can't understand. I can make fun of any obvious shortcomings, but obviously there's something that, for that audience, transcends them, and I've got to respect that.

None of which covers a backhanded dis of an entire genre and its readership, like this one.
Posted by J. Steven York at 1:57 PM