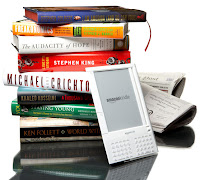 Steve:
We're headed out tomorrow to begin a "Workcation" to California. I'm going to be conferring with my son/collaborator on various potential projects, and Chris and I plan to make at least a Friday appearance at San Diego Comicon, depending on the insanity level, and our energy level.

But before we leave, a couple things happened yesterday regarding consumer digital rights that I wanted to comment on.

Digital rights are something much on writer's minds these days (or they should be) as ebooks are definitely becoming an important part of our business (even if they don't largely push paper books aside, and for better or worse, I increasingly believe they will, and digital piracy of our works a real concern.

Digital rights management should be about content creators having enough control of their work to sell and make a reasonable return on it. The result of this should be a marketplace full of tons of fresh content at reasonable prices, happy creators, and happy consumers

But in practice, it often doesn't work that way, especially in these early, wild-west days. Things that traditionally have been sold printed on paper are being sold electronically. The rules are changing, and there's quicksand along the new trails we're blazing.

Yesterday, hundreds, possibly thousands of consumers who own Amazon's Kindle ebook reader were shocked to discover a George Orwell book (certain editions of "1984" and "Animal Farm") had vanished from their readers. At least one student (quoted in a New York Times article) also lost all his highlighting and notes he'd made in preparation for a school reports.

Turns out Amazon had pulled these editions from their store, and when they did, they also used the "Whispernet" service to delete it from every Kindle out there. Consumers were refunded the (99 cents) purchase price, but still...

The irony is painfully obvious. The truth is a little more complex.

Effectively, the books were stolen property. Both books were, intentionally or not, pirated editions uploaded through Amazon's un-vetted self-publishing program (the same program through which we offer Kindle subscriptions to this blog, for example). The rights-holder complained. Amazon pulled the books.

Violation of copyright is a potentially serious offense, and Amazon has deep pockets, which pretty much requires them to respond to this quickly and strongly. I suspect the legal argument could be made that, because they had the ability to remove the pirated books from individual devices, they were required to do so.

Amazon could, in order to cover their asses, stop or revise their self-publishing program. They could require complex legal documentation of copyright ownership before putting a book up for sale. But that would limit and slow down publication of ebooks. It would limit the availability of historic and public-domain works, prevent content creators from marketing directly to the public, and effectively return publishing to the exclusive hands of deep pockets and major publishers.

Amazon shouldn't have pulled the books from individual devices, that's for sure, but it's quite possible their lawyers advised them to do it anyway. In a perfect world, Amazon could have said to the copyright holder, "whoops, our legitimate mistake, let us pay you a licensing fee for the copies that slipped out, and we'll remove the books from our store. No harm, no foul, okay?" The Orwell estate could still have gone after the provider of the original edition for damages if they wanted to, or they could have given them a stern warning, pocketed their little money, and moved on. That way, consumers get to keep their books, the copyright holder is compensated, easy self-publishing goes on, Amazon faces no unreasonable consequences, and the copyright is acknowledged and protected.

But that's not how the law works now.

But I'm one of those content creator types, and so is Chris. I don't want people sticking pirated editions of my stuff up on Amazon any more than the Orwell estate does, or Scholastic wants to see the latest Harry Potter pirated (something that has also happened in similar circumstances to the Orwell books).

But in the long run, control of electronic rights can't basic common sense and consumer rights. Ask the record business (if they've figured out out yet). You can't piss off the consumer repeatedly for your own benefit without eventual consequences in the marketplace.

Chris and I own a Garmin Streetpilot C550 GPS unit that we use in our car. Since we're preparing for a road-trip and our maps are more than a year old, I decided to upgrade my maps. I'd done this once before (one free upgrade came with the device). It's done on-line by hooking the GPS unit up to the computer. A web plug-in updates the device. It's slow (those map files are BIG), but shouldn't be that difficult.

First shock: the price. $69.95 for North American maps. I could replace the unit for about twice that. Maybe less. But I'm used to this one and I like it, so I gulp and pull out the credit card.

In a few minutes I've logged in and purchased my download. I hook up the GPS. I'm prompted for the serial number of the device. Okay. I enter it and...

I'm told that the device is registered to another account and the upgrade can't be installed.

It's immediately clear what happened. When I installed the free upgrade I must have created an account and registered the device. I thought this was a on-time thing and evidently didn't record it. A year later I create a new account.

There is an account/password recovery system where they email you the account details. Only problem is, when I try it, they give me the details on the new account I just created, not the old one I've forgotten. There is no tech support on weekends. I leave on Sunday afternoon for my road trip.

This is obviously an anti-piracy measure. If the download only works on one serial number, and that serial number has to be registered to one account, you can't share the map download with your friends. It's also a stupid fail in all sorts of ways.

Okay, just for starters, both accounts were created with the same name, address, and email. The very fact that the same email was used should have been enough to kick out a warning that I already had an account.

It should have warned me that I was buying a download upgrade on an account that had no devices registered to it, and I should do that first. Then I would have at least found the problem before I'd charged this to my card.

Even if it did let me create the duplicate account with the same email address, it should have provided both in the "lost account" email.

But the biggest fail is, if the damned upgrades were priced more reasonably, there would be little incentive to steal them, and all these draconian measures wouldn't be necessary.

But again, map companies have traditionally published maps on folded paper or on books, and charged a lot for them. (When you think about it, a navigation GPS is just a specialized ebook reader with the GPS functionality tacked on.) A Thomas Brothers Guide book for a major city will cost you $25 - 40. There's a lot of detail in one of those books, and my little GPS is the equivalent to a bookcase full of them. Should I be charged accordingly? I do have all that data, after all...

But like most individual GPS users, I rarely use that level of detail, and then not extensively. I've got a bookshelf, but in a given year I take down just a couple editions, and those I flip open only to a page or two.

In fact, I'm a worst case. I live on the narrow Oregon coast, where pretty much all local navigation consists of "drive X-miles north on Hwy 101" or "drive X-miles south on Hwy 101. It's rare to find ANYTHING that's more than two turns off that major highway. I make major use of those maps, a couple cities worth, a little bit, a couple times a year. $70 is pretty steep for something I could do almost as well (and did for years) with a couple folding maps or a $10 road atlas.

And mind you, this isn't a new purchase. It's just an UPDATE to a map I bought with the unit. Common sense says this is way over-priced. Which is a great incentive to steal it if at all possible.

But being a good, law-abiding sort, I tried to buy the over-priced map upgrade, and still ended up screwed. Their poorly designed rights-management and ordering system prevent me from putting the upgrade I've paid for onto the Garmin GPS unit which I've also paid for AND registered.

If you just pirate Orwell books directly, rather than going through Amazon as a middle-man, you don't have to worry somebody will take it away from you in the middle of the night.

In the near-term, that may serve the rights-holders interest. In the long term, it will inevitably bite them in the ass.

Reason in the Digital Age

For rights protection to survive, it has to meet certain requirements, and it must be coupled with reasonable pricing, reasonable terms of use, and ease of access to content, all of which reduce the incentive to steal.

It must be, if not of obvious service to the user (incentives to register, for examples, free replacement if you lose or break your device, or portability between multiple devices with the same owner), then at least relatively transparent. Buying a map update shouldn't be as complicated as getting security clearance from the CIA.

There should not be unreasonable restrictions on individual, personal use of the rights purchased. Restrictions should be aimed at preventing large-scale piracy, and nothing else.

Preventing me from installing a legitimate upgrade onto a legitimate and registered device is a great example of how this can fall apart. When I, as the consumer, try to pay (despite my reservations about the price) for legitimate content, and that isn't working for me, that's a huge incentive to say "screw you" and look for another way to get that content.

Maybe you find a free source, or go to a lower-priced competitor, or maybe you just look for a pirated version of the upgrade. (I know people who bought legitimate copies of copy-protected audio, video, and software, and STILL downloaded unprotected pirate versions to use. Why? Dealing with the copy protection was simply too inconvenient, even for individual use.) But all of these are losses for the rights-owner, as sure as piracy is.

The distinction between licensing and owning content is a difficult one for consumers to understand (there's a separate post to be done on this, which I'll try to do after vacation), but rights-owners should bend-over backwards to make those rights sensible and convenient for consumers as possible. Taking back a book that's already on your device is in no way sensible.

There's a story about the monkey and the jar of nuts. The monkey tries to take nuts out of the jar, but the neck of the jar is narrow and their hand barely fits. There's room for them to take out nuts one by one, but the monkey is greedy, and tries to hold onto a whole fistful. As a result, they can't extract their hand. They're trapped AND they don't get even a single nut.

That's often the case with rights-holders in the digital world. They hold-on too tightly to their content. Ultimately, they get nothing, and neither do consumers.

A compromise has to be found between the needs of consumers and the needs of rights-holders. These two examples show, we aren't nearly there yet.