From manuscript to book: The Christy Evans Story 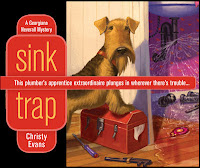 Steve:
We're rapidly coming up on the release of the first in a series of mysteries written by Chris under the pen-name of "Christy Evans." The first installment is called "Sink Trap," and it will be out in early October.
Since these are under their own pen-name, Chris has set up a seperate blog for "Christy," and has started an interesting series of posts that show some of the steps between completing a manuscript and having a finished book: cover art, cover copy, dedications, and so on.
It's interesting stuff, and the sort of thing that readers (and aspiring writers) never give a thought to, yet its a vital part of packaging and selling a book. It's also a surprisingly personal thing.
The first three installments in the series are up, with more to come. Find them here:
The Road to the Bookstore Part 1 - Cover Art
The Road to the Bookstore Part 2 - Cover Copy
The Road to the Bookstore Part 3 - Dedications
Posted by J. Steven York at 7:08 PM