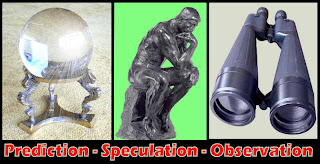 Prediction: Many new players will enter the ebook reader market in the coming year, from new models from older-players like Sony, to new players like Plastic Logic, to cheap LCD-screen models from no-name Asian companies. Many will fall by the wayside, but it's ultimately good for the consumer.

Speculation: Amazon will face increasing pressure to open their Kindle store to other hardware platforms. They claim they don't want to be a hardware company, but I'm not so sure, at least in the near term.

Of course, there are other reasons they want their platform closed until the ebook market and its relationship with publishing is well established. Until pricing and rights-management issues are ironed out, Amazon may not want to further muddy the waters by throwing things open.

The next year could be telling.

Observation: The ereader market isn't just about fiction, or even books.

Those of us in the fiction world have a tendency to think publishing and bookselling are all about fiction, but that has never been true. But the fledgling ereader market isn't all about books either. Far from it.

Look at the newspaper industry, for instance. Print newspapers are way down the road to extinction, and nobody has figured out how to make the web pay. A subscription-based model using ereaders has got to look attractive from many standpoints, and Amazon is eager to sell the idea.

The economics are easy to support on an individual basis. (I just traded a $500 a year daily regional newspaper for a $299 Amazon Kindle and a $168.77 annual subscription to the New York Times. And it's one of the more EXPENSIVE Kindle-available newspapers.)

From a corporate standpoint, it's more complicated, as graphics heavy ads don't work on Kindle or Sony Reader, and most newspapers have a lot invested in print infrastructure. But expect many papers to start offering deals on ereader hardware as part of subscription packages anyway. It's a survival issue.

Prediction: Despite the rumors, don't expect Apple to introduce a dedicated ebook reader. The word "dedicated" is no longer in their corporate dictionary. (No pun intended, if you've been following current news about their censoring a dictionary on the iPhone). If they enter the ereader market (Steve Jobs doesn't seem to believe there is one), it will be one feature on a much sexier and more flexible device.

Speculation: Barnes and Noble has announced an ebook bookstore without an ebook reader to go with it. It isn't even compatible with the two major players, Amazon Kindle and Sony. What's with that?

I'll tell you my best guess. If an exclusive Sony agreement doesn't appear in conjunction with some new model that includes wireless, expect them to start lining up non-exclusive partnerships in the coming year with Plastic Logic and other newer hardware players, as well as chasing more open platforms like cell-phones, netbooks, and PCs.

B&N knows they can't go head-to-head with Amazon on their own, and becoming a hardware company isn't in their skill-set. Instead, they'll use their long-relationship with publishers to make them comfortable in a way that Amazon never can, while they chase niche markets and try and end-run of Amazon.

All things considered, I don't think this is a bad plan.

Observation: Hasn't anybody noticed that this would be a great time to return to the old book-club model?

Yeah, I know, that seems crazy. Book clubs are so over, right?

But would you sign up to a commitment to buy a certain number of books (that you were probably going to buy anyway) over the next year or two if a shiny, new, Sony (or other brand) ebook reader with wireless were part of the deal? Even if it had the club logo and website on the case?

At least some of you might. The people who are early adopters of ebooks tend to be older, heavy readers. Exactly the folks who used to join book clubs.

Somebody do this please.

Then send me money.