eBook Sales Level Off in April. Is the iPad to Blame?

While eBook sales remain a modest percentage of the total dollar-book business, sales have been skyrocketing at triple-digit rates that pointed them towards gobbling a significant chunk of the business in the next few years.  The question has always been, would this growth rate increase, maintain, or at some point taper off.  Until now, there's been no sign of faltering.

But Publisher's Weekly has just released sales number for April, and growth as 127.9 percent.  Now, that sounds pretty big, but it's the lowest monthly rate of the year, and the first big stumble in eBook sales in a long time.  What happened?

Well, it's hard to be sure, but one really significant thing also happened in April: the iPad was released. 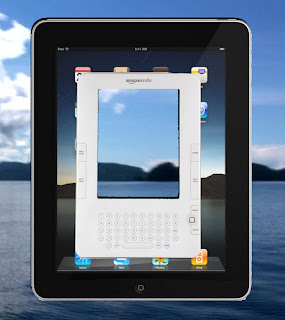 Yeah, the iPad, the mega-selling, wonder-eBook platform of the age.  The horse that major publishers decided to saddle-up in their effort to corral Amazon's Kindle.  The device with the color, the flash, and the technology (oh, sorry, but not the Flash) to take us roaring into the eBook age.

I've been warning since it was just a rumor that the iPad isn't as great an eBook reader as its made out to be, especially for novels and serious prose works.  In short, it's too heavy, battery life is too limited, the screen is difficult or impossible to read in bright light or direct sun, the LCD screen may not be as suited for long-term reading, and it's too large and expensive to drag around in the habitual and casual way you'd want for a reading device.

I've also warned that, even to the extent is is useful as an eBook reader, the wealth of entertainment distractions it offers (and for which is is much better suited) may actually discourage people from reading.

Now we've got another data point supporting my premise.

To be fair, the only evidence that the iPad caused the slump is proximity.  There's no firm connection yet, and other factors could be at work.  But it does make you go, "hmmm."

I should also point out that there could be one other explanation as to how the iPad could have created a slump that will only be temporary.  Anticipation of the iPad's release was so strong that many consumers would might otherwise have bought an Amazon Kindle or other dedicated eBook reader such as the Nook or Sony Reader, may have instead delayed their purchases to get an iPad.  Since Amazon doesn't release Kindle sales figures we have no way of knowing if reader sales were down in April or in the months preceding.

If that's the case, and these consumers have instead bought iPads, and if indeed they do begin using those iPads as book readers, than sales could rapidly surge back and even increase in the months that follow.  (It should also be mentioned that Apple's iPhone 4 has also just been released, with a vastly sharper screen that makes it potentially a much better eBook device than its predecessors).

I'll say what I've said before.  The real test of the iPad's influence on the eBook market will only come over the long-term.  Will iPad owners adapt to reading on their new devices, or will they use it for other functions and consciously or unconsciously cast its eBook functions aside?  And if the iPad doesn't entice people to read eBooks, will they continue to go to dedicated readers like the Kindle for that function, continue to read dead-tree books, or reduce their reading overall.

It's this last possibility that's most worrisome, though I consider less likely than the others.  It's going to be interesting to see what happens to eBook sales numbers in the coming months.

Although here's one more fact to consider: we're heading into Summer, the time of the "beach read," and this is the area where the iPad really falls down as an eBook reader.  That James Patterson book is going to be a complete wash-out as you sit there in the sun on your beach-towel.  But on the other hand, so are any of the other reading distractions that the iPad can offer up.

Maybe a lot of iPad owners are going to sitting in their deck chairs this summer, iPads stowed away in their beach-bags, reading good, old-fashioned, dead-tree books like always.  And that that would suit a lot of traditional publishers just fine.

Posted by J. Steven York at 11:29 AM No comments: Links to this post

Posted by J. Steven York at 12:46 AM No comments: Links to this post