New Mystery from Chris(ty) and Steve! 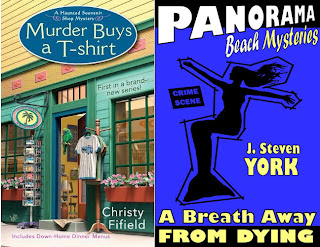 Chris (writing as Christy Fifield this time) and I both have new mysteries out.  As it happens, both are set on the north Florida coast (though in different time periods).  Let's examine, compare, and contrast, shall we?
First up, Chris has a brand new mystery series launching from Berkley Prime Crime, as I said, under a new pen name.

The "Haunted Souvenir Shop" mysteries, starting with "Murder Buys a T-Shirt," are set in the fictional town of Keyhole Bay, where Glory Martine has just inherited her late Uncle's gift shop, a place full of secrets, dusty memories of times gone by, a foul-mouth parrot, and literal ghosts, who just may be using the afore-mentioned parrot to communicate from beyond the veil!  Can clues from the afterlife help her solve the mysterious death of a local sports hero?

If you like cozy mystery, Florida mystery, contemporary fantasy, humor, or southern cooking, you'll love this new series!  You can order the Kindle book or paperback using the Amazon link provided, order the ebook directly from your favorite device, or pick it up at your favorite local or on-line bookseller.

For my part, I have the second installment in my "Panorama Beach Mysteries," series (after "The Best Devil Money Can Buy).  This series is also set in a fictional Florida panhandle town, the resort community of Panorama Beach, but the year is 1967, when the relatively untouched, sugar white beaches are dotted with small hotels and colorful, quirky road-side tourist attractions which will provide backdrops for the stories.

Our hero is Deputy "Mustang" Sawtell, the youngest and newest lawman on the beach, an idealist with a strong moral compass given to him by his "Memaw," his late grandmother who raised him.  As in "The Best Devil Money Can Buy," Mustang is navigating the dangerous political waters of his new assignment, from the questionable ethics and morals of some of his fellow officers, to others who who are unquestionably bad, to his dangerous and morally compromised boss, Sheriff "Big" Bass.

This time he answers a prowler call to the Aquarama aquarium, only to find the body of a dead mermaid, a performer in an underwater show.  He's thrown off the case by a vindictive superior officer who quickly bungles the investigation and rules it an accidental drowning.  So when, for his own reasons, Big Bass gives him another crack at the case, Mustang is eager to set things right.  But he's in danger from all sides.  If a murderer on-the-loose doesn't get him, one of his fellow officers just might!

Both Panorama Beach mysteries are available thought the Kindle link provided, or through all major ebook outlets. A third installment, "The Beat of Angel's Wings" will be out later this year.